keyboard_arrow_down
The general interest of this group is on transcription factors and signalling molecules important for embryonic development of brain, head and limbs. Our experimental approaches combine in vivo genetics, organ cultures and stem cells. We recently extended our knowhow to transcription profiling and bioinformatics tools.
Our specific interests are:

Dlx genes are expressed on the tip of growing appendages of all animal species, including the mammalian limb buds. In human, mutations or genomic mis-organization of DLX5-DLX6 cause the congenital malformation SHFM type I. We previously published that the combined Dlx5+Dlx6 knockout mice reproduce the SHFM phenotype. This finding has opened the way to comprehend the molecular basis of Dlx gene functions for limb development. We are focusing on a regulatory network involving Dlx5;Dlx6 and the p63transcription factor, essential for epithelial stem cell functions and for the maintenance of stratified epithelia. Indeed p63 mutations in human cause the congenital disorders SHFM type IV and EEC. In cooperation with Dr. Guerrini (Univ. Milano) and Dr. Costanzo (Univ. Roma) we have evidence that p63 controls expression of Dlx5-Dlx6, which in turn regulate FGF8 and Wnt5a. FGF8 promotes p63 protein stability by antagonizing the isomerase Pin1, which tends to degrades p63. These regulations are needed for normal limb development.

We believe that the SHFM and EEC animal models offer a unique opportunity to optimize procedures for AAV-mediated gene transfer to the embryonic limb (the AER) and skin (epithelial progenitor cells), first in ex-vivo limb cultures and then in vivo (with Dr. Auricchio TIGEM Pozzuoli). If successful, the congenital defects of SHFM and EEC could in principle be corrected in-utero.

The role of Dlx transcription factors for interneuron development

Dlx genes are expressed in a temporal and spatial sequence in neurogenic area of the embryonic and adult forebrain (peri-ventricular region, hippocampus) and in most of the regions where GABA differentiation takes place, including migrating interneuron progenitors. The absence of Dlx5 leads to loss of CR and TH interneurons in the olfactory regions of the neonatal brain. Using the neurosphere and the adherent NS methods to expand neural stem cells we have shown that Dlx5-/- NSC have a reduced neuronal differentiation potential, thus Dlx5 may control critical steps necessary for differentiation of interneuron progenitors.

We aim to clarify a molecular signature for GABA+ differentiation and comprehend the role of Dlx genes in this process. Transcription profiling of Dlx5-/- neurospheres has led us to recognize the secreted signalling molecule Wnt5a as a candidate for aDlx5 target, capable of promoting interneuron differentiation. We have functionally validated this regulation, using both primary culture of dissociated brain cells and adherent neural progenitor cells that recapitulates GABA+ interneuron differentiation, in vitro. We are now addressing the function of Dlx5 in the adult cortex and hippocampus, using a cre-lox conditional technology (with Dr. Levi, CNRS Paris, FR). These results will be combined with data from single-cell RNAseq analyses of cortical neurons (with Dr. Zecchina, Politecn.Torino).

A new line of investigations addresses the role of the small GTPase Rac1 for migration maturation and electrical activity of the inhibitory network during cortical and hippocampal development.  Preliminary results indicate that Rac1 hyperactivation leads to altered actin dynamic at the growth cone, increased risk of seizure, cognitive and electrophysiological defects.

Axon Extension and Connectivity in the Olfactory System
During embryonic development, immature olfactory neurons project their axons towards the anterior forebrain, to establish the primitive connections; at the same time GnRH+ neurons use these axons to reach the septum-hypothalamus area. This process is specifically impaired in the Kallmann syndrome, characterized by the inability to perceive odors and defective GnRH hormonal system. 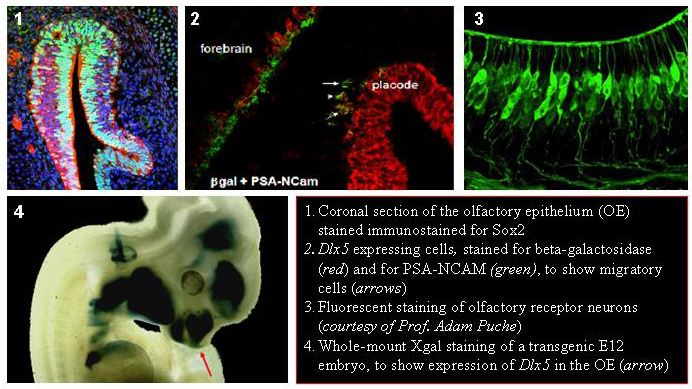 While several Kallmann-associated genes are known, the molecules involved in guidance and connectivity of olfactory axons are not well known. We have identified a Wnt responsive cell population on the surface of the OB, involved in olfactory connectivity, using a combination of a transgenic b-catenin reporter with organotypic cultures of the embryonic nasal region.

The absence of Dlx5 leads to a Kallmann-like phenotype, thus, Dlx5 controls early steps in the guidance/connectivity of the olfactory axons. Using transcription profiling of the embryonic olfactory epithelium and bioinformatic analyses we have identified coding mRNAs and microRNA involved in the process (with Dr. Provero, Univ. Torino). We are also adopting lines or reporter zebrafish to image the olfactory and GnRH neurons, and provide functional information on novel Kallmann-associated genes (with Dr. Santoro, Univ. Torino, Dr. Pitteloud, Lausanne CH). 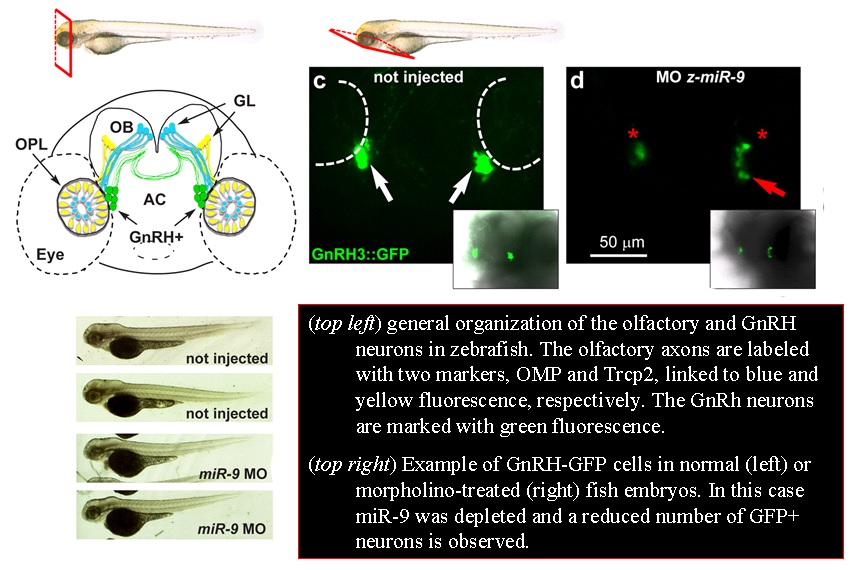 Added value of this research resides on the peculiarity of the adult peripheral olfactory system to renew its neural component: progenitor cells give rise to new neurons, these extend axons to the OB to re-establish connections and topography. On the long term, investigations on the regulatory network used for olfactory connectivity may have more general implications for the biology of nerve regeneration and repair.