Chronic lymphocytic leukemia (CLL) is the most frequent leukemia in Western countries and it is a very heterogeneous disease from the biological and clinical standpoint. Despite the high rate of response obtained with the standard association of conventional chemotherapy and monoclonal antibodies, CLL still remains an incurable disease. Refractoriness to treatment or disease relapse can be determined by drug-resistance phenomena, sustained by tumor clone intrinsic characteristics, or induced by microenvironment interactions.

Multi-drug resistance (MDR) is mediated by the over-expression of membrane transporters, like P-glycoprotein (Pgp), which actively extrudes several anticancer drugs. The Pgp protein is the product of the mdr1 gene whose regulation is under the positive control of the Mevalonate (Mev) pathway, which is the metabolic pathway leading to the synthesis of cholesterol and isoprenoid molecules. We recently observed that the Mev pathway specific inhibition with statins can downmodulate the downstream signaling pathways (Ras/ERK1-2, RhoA/RhoA kinase signaling cascades and HIF-1α/Pgp axis) reverting CLL cells resistance to doxorubicin, a Pgp substrate.

The role of tumor microenvironment in protecting CLL cells from spontaneous and chemo-induced death is well known, and one of the main players in this cellular interaction is the CXCL12/CXCR4 axis. The specific molecular mechanisms by which the CXCL12/CXCR4 axis exerts its protective effect have not been completely elucidated.

We are currently investigating 1) how the intrinsic characteristics of the tumor clone (i.e. TP53 gene mutational status and novel genetic mutations) influence the interactions with microenvironment and the role of Ras/ERK1-2, RhoA/RhoA kinase and HIF-1α mediated signaling cascades; 2) the CXCL12/CXCR4 signaling and Mev pathway cross-talk, in order to determine the chemo-sensitizing effects of statins and their modulating effect on the CXCL12/CXCR4 axis. 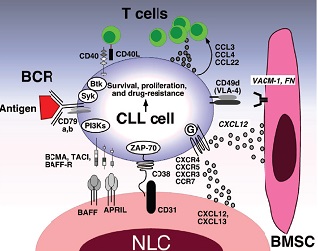