Mechanisms and therapies of chromosomal translocations in cancers

My laboratory is interested in mechanisms and therapy of cancers. One main focus of the lab is to elucidate the mechanisms that drive transformation of lymphocytes. Most lymphomas, but also an increasing number of solid tumors, are characterized by defined oncogenic events, such as chromosomal translocations. One line of research in the lab is dedicated to the elucidation of basic principles that govern chromosomal translocation formation in normal and neoplastic cells. In collaboration with other groups, we developed a method to map translocations at a genome-wide level, thus initiating a series of studies aimed at defining general rules for translocation formation, focusing on how transcription, DNA Double Strand Breaks (DBSs), tissue specificity and other nuclear or DNA repair factors can influence the type and the frequency of translocations found in human cancers. 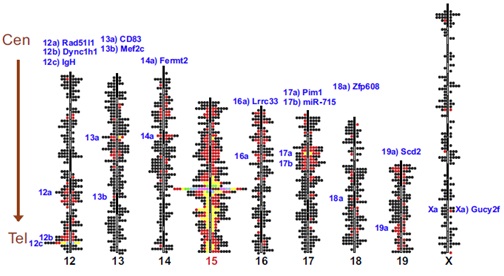 Among disease-defining translocation in lymphoma, the translocations involving the Anaplastic Lymphoma Kinase (ALK) gene are characteristic of Anaplastic Large Cell Lymphoma (ALCL), but were recently found also in Non-Small Cell Lung Cancers (NSCLC) and other type of solid tumors. We have extensively studied the role of ALK in lymphoma by discovering multiple pathways exploited to induce cellular transformation. By exploiting xenografts and mouse models for ALCL and NSCLC, and also neuroblastoma, we want to define relevant mechanisms of ALK-mediated transformation in vivo but also to validate therapeutic approaches to target ALK in such cancers. We are currently implementing innovative therapies such as ALK inhibitors, ALK-targeted siRNA and ALK-specific cancer immunotherapy. In this context, we developed a vaccination protocol that generates a strong ALK-specific immunization and seek to explore its potential use in clinical protocols.

One more line of research in the lab is devoted to the discovery of novel genetic lesions in lymphoma and solid tumors, by modern techniques of next-generation sequencing. In particular, we recently co-discovered mutations in FBXO11, a gene involved in the degradation of BCL6 in human lymphomas. We aim at expanding these findings to other lymphomas or solid tumors, and at generating mouse models to uncover the role of such gene in normal B cell development and lymphoma formation.